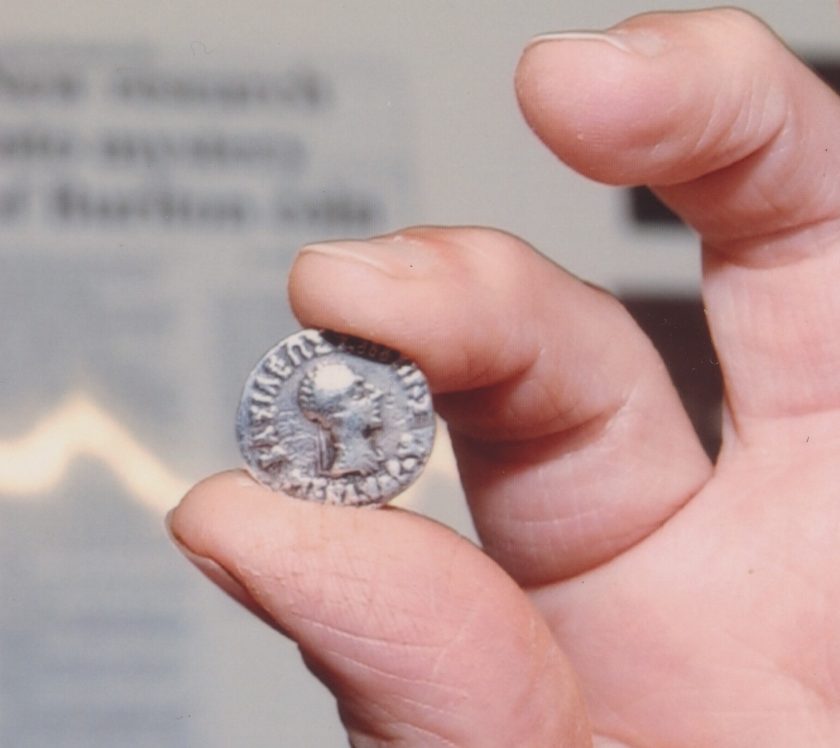 We had an exciting prelude to our big annual exhibition when an ancient coin, unearthed in the 1920s near to Buriton, was a central feature of the August edition of the BBC History magazine.

Although the coin is older than the ancient coins generally found in Britain , the age of the coin isn’t the most remarkable thing about it. T he really stunning thing about the coin, as the author of the article Dr Llewelyn Morgan explains, is not its age – but where it originally came from and speculation about how it got here.

Dr Morgan, a fellow of Brasenose College at Oxford University , explains that the King whose profile is depicted on the coin, King Menander, ruled between 155 and 130 BC. He was a Greek King but the territory that he ruled at that time covered a swathe of what would now be Afghanistan , Pakistan and northwest India .

By the time that somebody mislaid the coin in Hampshire it had travelled some 7,000 miles – in an age when society was much less mobile than our own today.

The coin was dug up by Albert Passingham sometime in the 1920s in the course of his work as a gamekeeper on the Nursted House estate, Buriton. Albert gave the coin to his sister and in turn it has been passed it on to her granddaughter, Catherine, who now lives in Fareham . Albert’s daughters Jill (who still lives in Buriton today) and Rita have been in contact with Catherine and Dr Morgan as the story of the coin has unfolded.

Dr Morgan explains that the coin was probably dropped in Hampshire around 100AD, shortly after the Roman Conquest of Britain . It would already have been an antique and would not have been legal tender. It can only have been a keepsake – perhaps of a long-distance traveller or merchant.

What tales the coin could probably tell, suggests Dr Morgan: a month-long sea-passage with the monsoons across the Indian Ocean, camel caravans across the Egyptian desert to the Nile, the gruelling journey up the valley of the Rhone in the teeth of the mistral winds and finally the strong tides and unpredictable foggy weather blanketing the English Channel .

Dr Morgan had made contact with the Heritage Bank to see if we could shed any light on exactly where the coin might have been found.

The information has added another fascinating story to our swelling archives – and has already encouraged a number of local people to have a look for other local history about Buriton.

We hope to feature information about the ancient coin at our special Heritage Bank Exhibition on Saturday September 9 th .

[More details about the ancient King Menander coin and its passage to Hampshire can be found on pages 46-47 of the August edition (vol 7, no 8) of the BBC History Magazine.