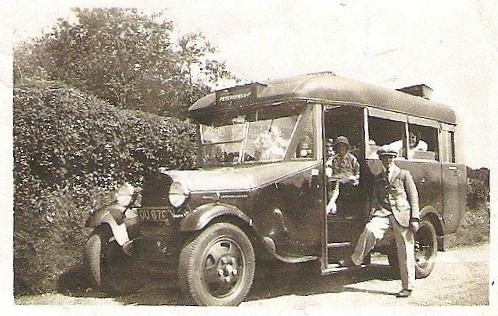 The annual ‘Bygone Buriton’ event attracted almost 200 visitors to St Mary’s church on 26th September – including families from around the country.

People travelled from as far afield as Leeds, Nottingham and Wales to chat to old friends, find out more about local history and bring photographs.

Amongst those bringing old photographs this year were Carole and June Gauntlett who had been regular visitors to Buriton in the late 1940s and early 1950s when their families were amongst the scores of people who stayed in temporary huts at Cowhouse Farm for the hop-picking season in September.

They met up with Ted Underwood who had also been a regular hop-picker until the Manor Farm stopped growing hops in the 1960s.

And, on the eve of the exhibition, the organisers received an email from Miami , Florida , with photographs of the Little Wonder Bus which used to link Buriton to Petersfield and East Meon .

There was particular interest at the exhibition in the information about the First World War, with a special presentation about all the men who had joined the forces.

Almost 200 men had gone away at some time during the war – out of a total population of less than 800. Information has now been collected for almost 140 of these ‘Brave Boys of Buriton’ and the presentation explained their roles in the great conflict.

We learnt a lot more about one of Buriton’s soldiers at the exhibition, Joe Hall, whose relatives brought in a number of fascinating photographs.

Buriton’s local history team still want to find out more about what life was like at home during the First World War, as well as finding out more about every one of the parishioners who took part.

Anyone with information about the local history and heritage of the parish of Buriton should contact Doug Jones by telephoning 01730 231326 or email doug.pam@btinternet.co.uk