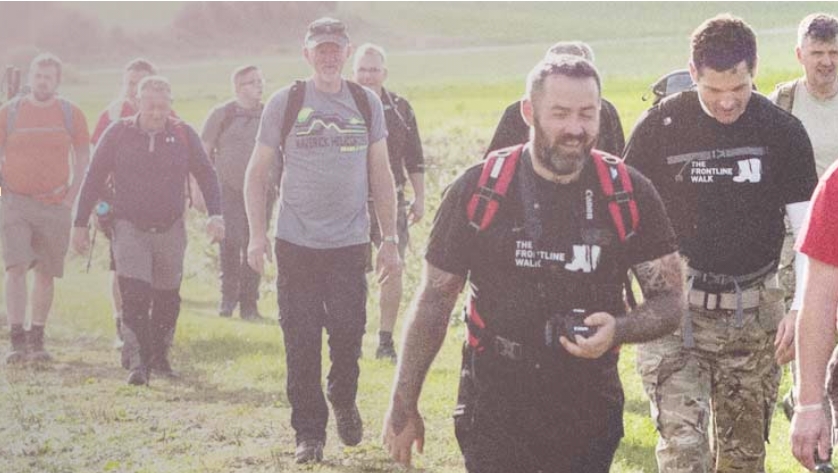 ‘ABF, The Soldiers’ Charity’ usually organises a big fund-raising ‘Frontline Walk’ around the Western Front battlefields and the Normandy Beaches. But, due to the Coronavirus pandemic, it was arranging a UK-based event this year.

The three-day walk was to begin at Wellington Barracks, close to Buckingham Palace, and finish at Southwick Park, near Portsmouth – visiting a number of places that played roles in WWI and WWII.

The organisers had deliberately designed their route to pass through Buriton so that all the participants could learn about life in this village during both conflicts.

Using information from the Buriton Heritage Bank website and from our publications about the First World War and the build up to D-Day, the organisers were providing information about the village to all the walkers as well as preparing a number of information boards to display near the church and war memorial as they visited.

Other places due to be featured along the 100 kilometre route included the largest military cemetery in the UK (at Brookwood), old Army Camps and sites of several RAF and Luftwaffe plane crashes before finishing at Southwick Park – where General Eisenhower, General Montgomery and Admiral Ramsay engineered D-Day (now the HQ of The Royal Military Police).

The walkers were expected to arrive in Buriton at about 8.30 – 8.45am on Saturday 10th October – on the last leg of their walk.

But, unfotunately, due to the ongoing pandemic situation the organisers decided to cancel the event. They say that they feel sure that at some point in the future the ‘Home Front’ walk will take place and so they still hope to visit Buriton and see the village with its links to both World Wars.

‘ABF, The Soldiers’ Charity’ is the national charity of the British Army, providing a lifetime of support to soldiers, veterans and their families when they are in need. Here is a link to their official Home Front walk page: https://events.soldierscharity.org/event/frontlinewalk/home